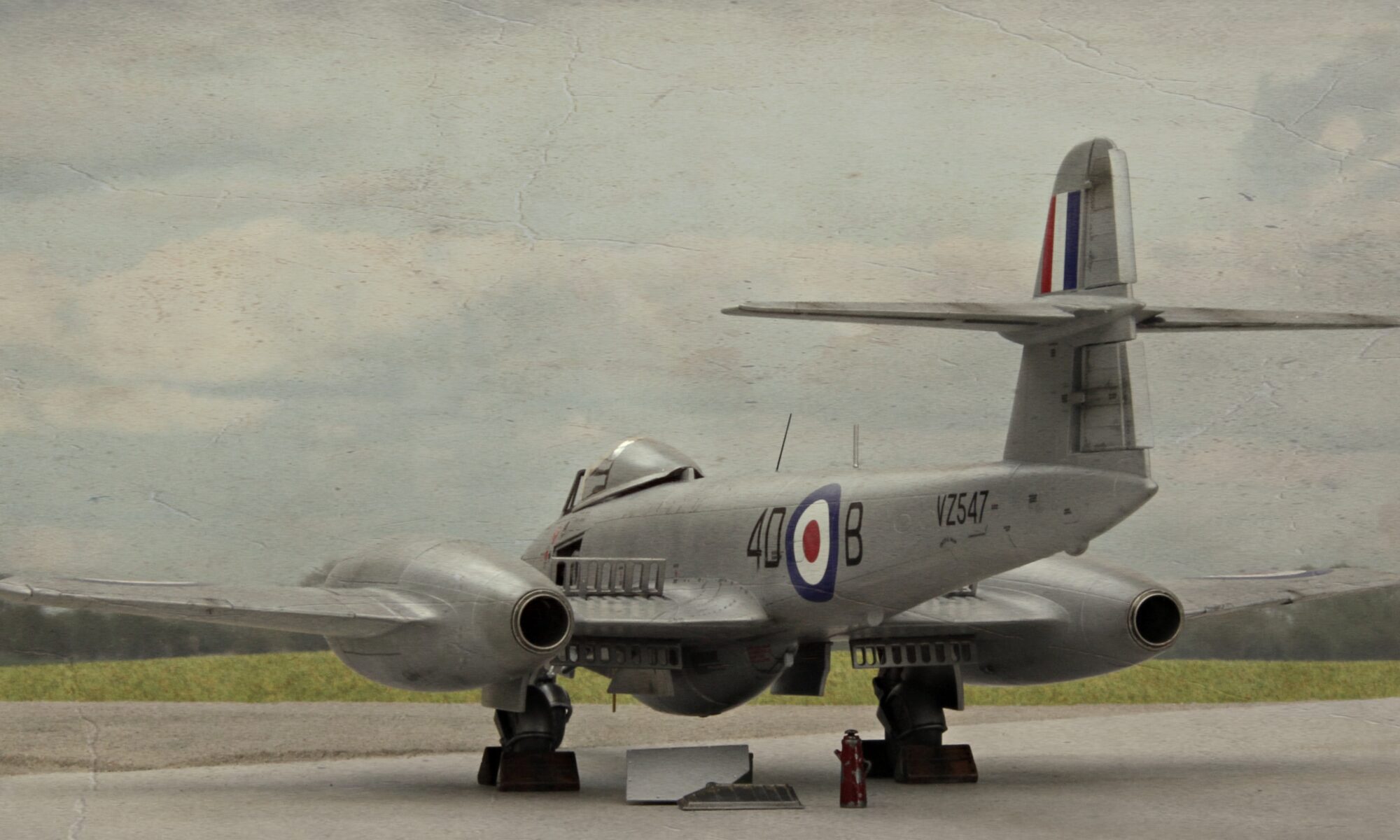 This is Airfix’s Gloster F.8 Meteor, my first complete build of 2021, and another completed due to the Covid-19 lockdown measures.

The kit is OK. There are many good points, and some not so good. Overall, the kit feels like engineering effort and thought was applied around the cockpit and engines because this is so good but by the time the rest of the airframe was considered this had all run out. The kit is noted for having fit issues around the nose, and mine was no exception. It appears that the upper part of the nose gear gets in the way and clashes with the inside of the nose cone. I also forgot to add the nose wheel door at the same – adding this at the end doesn’t work. Also, watch out for warped centre and rear fuselage where the plastic is a bit thin. I needed to add additional tabs to help the fuselage joint line up. And as with most kits, keep a close eye on tailplane alignment while the glue drys as the fit of these pieces isn’t very positive. I also had to add spreader bars inside the centre fuselage to push the body out in order to improve the upper wing root joints. No of this was hard to fix, you just need to take care and pay attention. Another difficulty is the landing gear where the wheels need painting, then fitting into the gear legs. One then has to clean up the joint along the top of the mudguard and paint the mudguard without spoiling the previously painted wheels. Overall, and when complete, it’s a very pleasing kit.

Oh! Add plenty of weight to the nose!!

My intention was a much more weathered finish but I didn’t work the paint layers enough. However, I am happy with the overall finish which to my eye looks like a good representation of High-Speed Silver (like most ‘silver’ RAF aeroplanes it is not meant to be a polish metal, or natural metal, finish). High-Speed Silver is silver and clear dope mix that was used both pre- and post WWII. My version is a mix of Tamiya’s LP-11 with some white.

I was hoping that by leaving off the gun covers I would be able to pose the model with them on or off. But sadly, once the gun detail is added, the covers will not fit properly. Oh well. I also regret posing the airbrakes open. In the end, I think they lack detail. But I’m also told, via an RAF rigger, that they were dangerous things and were never left open when on the ground. So next time, and there will be a ‘next time’ as I have 2 more in the stash, they will be glued shut early in the build.

The pictures above, on this page, were taken using my usual process. Take a look at my Taking Pictures of Models page for more details.