This site is used to trial and test WordPress themes for client-based work. At any one moment the graphical and structural aspects of this site my be in a state of change, sometimes drastic, or be dormant using a default theme.

Content on this site showcases just a few elements of my personal life – hobbies such as modelling, flag making and the like – and has nothing what so ever to do with any client work.

This is my second completed kit of 2020 – all due to Corvid-19 lockdown and the great surge in model building that swept the pages of Facebook.
The kit is pretty intesting. The parts count seems high for what you end up with. But there are many alternative parts which help add to the fun of this build. My only complaint is that nearly every part needed scraping and cleaning to remove mold and seam lines. Laborious and teadious.
My version shown in the photos was built straight from the box without anything else being added.

Airfix
At the time of writing the kit was not available from Airfix. My build was from the standalone boxing, although I do have another boxed with the Albion refueller and Hurricane Mk I. Airfix’s 1/48 scale Hawker Hunter F.6 with a couple of aftermarket bits; resin wheels and wheel bay doors plus an aftermarket decal sheet from Xtradecal. There’s a few aerials added made from stretched sprue.

Normally I build WWII era British aircraft. They are usually portrayed as well used and have a matt finish. The Hunter, even when in service, had a smooth surface and a natural sheen about it. Glossy when new, less so once in service. I wanted to create this smooth sheen finish and avoid a thick gloss varnish look. I also wanted to try out a colour for ‘High Speed Silver’. This was the RAF’s go-to colour for both pre-war biplanes and post-war jets. The Hunter is supposed to have High Speed Silver undersides in this scheme. Later this was changed to light grey. My plan was to practice both the shine and the High Speed Silver on this kit.

It didn’t go well. I tried using Alclad2’s Klear Kote Gloss thinned with lacquer thinners. After several attempts I kept getting either a rough surface splodged with random very shinny bits, or an orange peel effect. Clearly I’m missing something in how best to spray this paint. I sanded and polished this back after each failed coat. In the end I resorted to Johnson’s Klear and a light polish after that. Unfortunately I still have the remains of the orange peel in the paint surface.

I used Humbrol’s 11 Silver for the undersides. I ignored my own better judgement to use of the Alclad2 metallic lacquers. The main reason is that I didn’t think I had one of the right colour. So instead of waiting and buying the right stuff, I pressed ahead. Oh dear.

I used preshading on panel lines and post shading with oils. White oil paint was used to give the roundels a faded look as well as panels painted grey. I used yellow oil paint on those painted dark green. There are also oils used for the black oil staining and streaking as well as some light Tamiya Smoke in places. Chipping was kept light and limited to areas on the leading edges and around the intakes. The chipping was done with a lighter grey and lighter green paint rather than bright silver/aluminium.

I have another Airfix Hunter in the stash. The kit is good, I just need not to be so lazy with my modelling – I need to do my research and do some practice paint shots first before moving to the model!

Here’s how I took the shots. It’s my usual ‘grass’ wargaming play mat (actually, it’s my son’s!). With a bit of card and a backdrop image printed on 3 sheets of A4. As ever, the important trick is to not be too close to the subject with the camera, and to use an f stop giving a wide focal depth. I think I used f/32.

Spitfire Mk.Vb BL255 flown by Don Gentile  336th Fighter Squadron, 4th Fighter Group, USAAF at Debden August 1942 – in 1/48th scale. This is the Airfix Mk Vb kit with resin exhausts and PE seat belts. The markings are Montex masks – and great things they are too!
The kit is no Tamiya, but it’s a massive improvement on the previous MkV. I think Airfix have nailed the shape and form and I love all the extra bits and 2 versions of the windscreen. 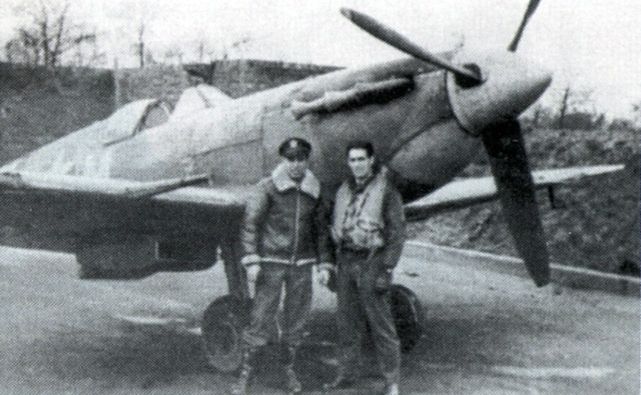 This model was a bit of an experiment really. As well as using paint masks for the markings for first time, I was testing Xtracrylix paints from Hannants. I think the colours are spot on (not that you can tell from the images) and better than Tamiya’s Ocean Grey/Dark Green, but the paint seemed a bit ‘plastic’ and my normal chipping process ended up being more a case of ‘peeling’ more paint off then was desired. As you can see, the wing root is rather over done. I think I messed up on the starboard fuselage markings too – I think the MD and T should be the other way around. And there are other mistakes. Anyway, calling it done. This is the Airfix Supermarine Spitfire Mk XII kit cross-kitted with the spare wings from their Seafire Mk XVII kit, plus some addition items. The build took me about 9 years to complete as it sat on my ‘shelf of doom’ for much of that time.

The final finished build shown in the photographs represents a Supermarine Seafire Mk XV, serial PR479, “L”, of 803 Squadron on board HMCS Warrior during November 1947.

In the photographs – and it’s not meant to be a diorama, just a bit of scene dressing – the truck is the Airfix 1/76 AEC tanker, there’s a 1/48 scale Airfix trolley acc. chocks, and in the distance is 1/300 scale Bedford trucks and Dodge weapons carrier. There’;s also an scratch-built RNAS Mainhill hangar made from card in the same 1/300th scale. The back scene is a photo I took on the way home from work last year, in 2019 – just south of the Thames at Lechlade – and printed on 3 sheets of A4/letter paper (I photoshop’d out the seam lines). And the whole lot is plonked on a war hammer play mat and bit card to represent the hardstanding/pan.

Additional items used in this build: The main mistake made is that I managed to get the Extra Dark Sea Grey and the Dark Slate Grey – the two main camo colours – around the wrong way. I didn’t notice until well after several more layers of vanish and decals. Doh! But, hey, so what? The root issue was that damn Airfix moulded-open hood; where the rear and middle sections are moulded together causing a mental mind puzzle for painting inner and outer surfaces. Anyway, before attaching the hood it was pre-painted to show the external colour on the airframe visible under the centre sliding section. Here’s the rub; I got this right in terms of colour! But covered it up with masking before final painting the rest of the airframe. There was so much time in between steps that I forgot which way around I had the colours – and I failed to read the paint scheme instructions correctly. So now there’s a miss match of camo colour under the hood. More obvious to the naked eye than in the photos.

Overall, that damn hood caused all the problems in the first place – through my own fault I damaged the original and needed to get a replacement, which I then damaged as well! Hence the shelf of doom.

There are other issues, such as, in my view, too much chipping. I did want it to look tired, as if ready for the scrap yard. I even planned to have a flat tyre (but those beautiful Eduard resin wheels were too good to mess with).

Here’s build photo showing the dry-fitting of the Seafire XVII wing stubs to the Spitfire Mk XII fuselage. You can also see the added strengthening strips and hoist attachment points that I added.